An Affinity Diagram is a project management tool that helps teams organize and review large quantities of data by categorizing the information into groups. 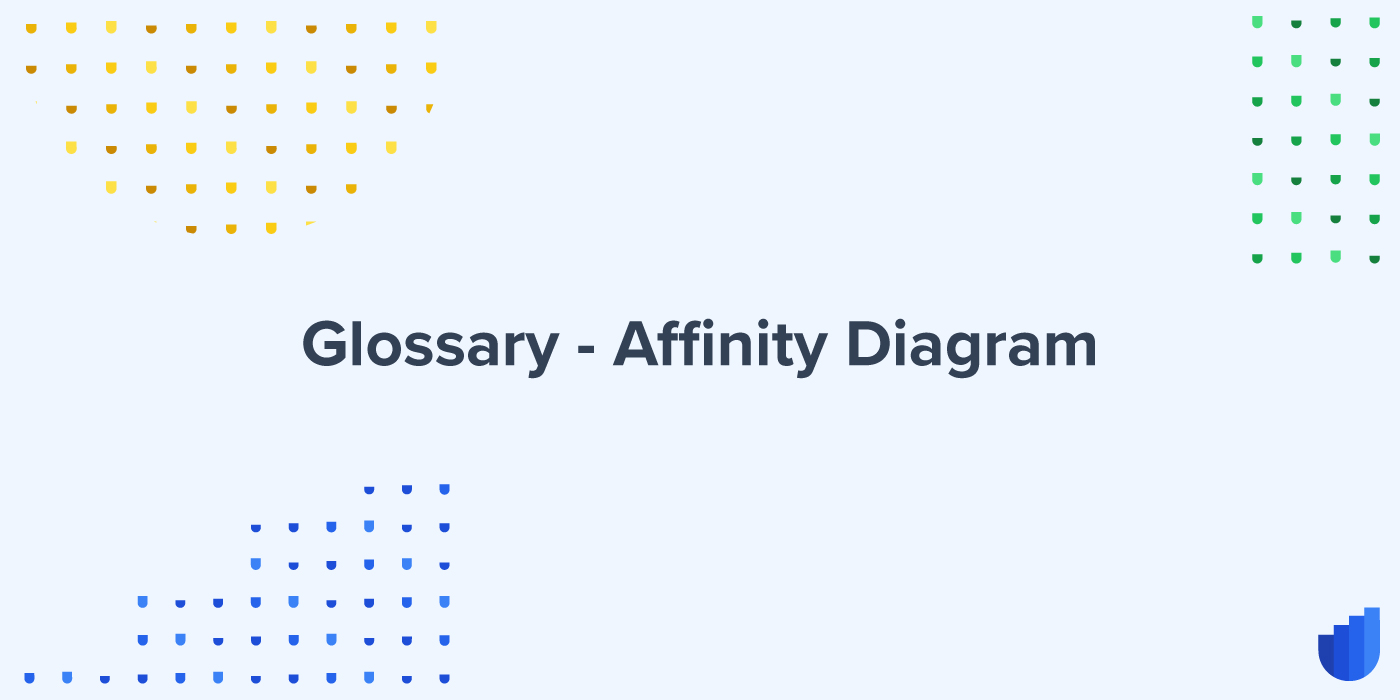 It can be overwhelming to address a long list of issues from everyone in your team. However, this is inevitable as projects become larger and more complex. Thankfully, you can make your life easier with certain tools that can help discuss and resolve issues quickly and in an organized fashion.

One tool that helps with this is the affinity diagram.

In this glossary article, we look at the affinity diagram, its history, and when and how to use it.

What is an Affinity Diagram?

An affinity diagram is a visualization of large amounts of data that groups items and ideas into categories. It prevents teams from being locked in the time-consuming process of analyzing each idea on a long list without context. Through this, it’s easier for teams to spot trends and patterns, ultimately leading to better decision-making.

The affinity diagram has its origins in the KJ Method, created in the 1960s by ethnographer Kawakita Jiro. When they had to deal with large amounts of data gathered from fieldwork, they knew there had to be a better way.

The purpose of the diagram is to generate information concerning any product, process, or complex issues into categories based on how related they are to one another.

When to Use An Affinity Diagram

The affinity diagram is best used at certain stages of your product development. These are some of the best opportunities to leverage its capabilities.

How to Make An Affinity Diagram

During brainstorming, allow everyone to generate ideas on the topic you’ve chosen. Writing directly onto sticky notes or cards will also help make the discussion seamless as you continue with the process.  Written ideas are expected to be between three to seven words long.

Display the cards or sticky notes on a large work surface, a whiteboard, or any other area, as long as it’s visible and readable by everyone. At this point, you don’t need to worry yet about grouping the ideas. You just need to stick each idea randomly on the surface.

With your team, attempt to look for relationships between individual ideas and sort them into 5 to 10 related groupings. Do this until all ideas have their own group. Remember that some ideas may not belong to any groups, and that’s okay. Also, if an idea belongs in two groups, create another note for it.

During this step, do not put any determiners yet, such as categories or headings.

From the groupings, attempt to define and create header cards for each grouping or category. As you discuss, make changes and move ideas around as necessary. Once ideas are grouped to the team’s satisfaction, it’s time to create affinity headers.

To do this, look for the common denominator for each group that captures its overall meaning. After doing so, place the header at the top of the group. You can also combine groups into “supergroups.”

When writing the affinity headers, you can group the feedback with the following headings: New Feature Requests, UI Complaints, and Functionality Complaints.

The first step in building an affinity diagram is to write the problem statement at the top of the diagram. After doing so, now it’s time to place the headers and superheader cards above the groups of ideas. Now that you have a complete visual of the groups and ideas, you can discuss, review, and clarify the groupings again with your team.

The use of affinity diagrams is broad enough that it applies to a variety of industries, whether in the hospital or at a manufacturing company. Let’s take a look at some examples of where teams can use affinity diagrams to help resolve issues better.

You noticed that your content writing team hasn’t hit the target number of finished content within a period. To help resolve this, you can use an affinity diagram to uncover any problems and find solutions.

First, you start by asking your team, “What are the reasons behind the delay in the content creation process?” The team then writes down their answers on sticky notes.

After everyone sends their ideas, it’s time to ask the team members to organize ideas into similar groups. The result should look like this:

Now that all ideas have their own groupings on the board, you can discuss with your team the headers for each group. Once the team is done with the discussion, the affinity diagram should look more organized.

Looking at the diagram, it’s easier to discuss ways and find solutions to each group to bring back your team’s productivity and efficiency. In addition, with a better visual of the problems, it’s easier to determine the root causes and address them effectively. So now, instead of solving 16 issues, you only need to solve 5 of them.

Tips When Building an Affinity Diagram

Here are a few things you have to keep in mind, especially as you make your first affinity diagram:

As a manager, it is your responsibility to resolve issues and discuss ideas quickly, to ensure that everyone gets back on their feet and be as productive as they should be. The affinity diagram is a valuable asset that helps you keep up with the chaotic list of issues and ideas.

Using this tool can help you build an environment where people are heard and share their input. That way, issues are resolved faster—allowing you to avoid bigger problems in the future.