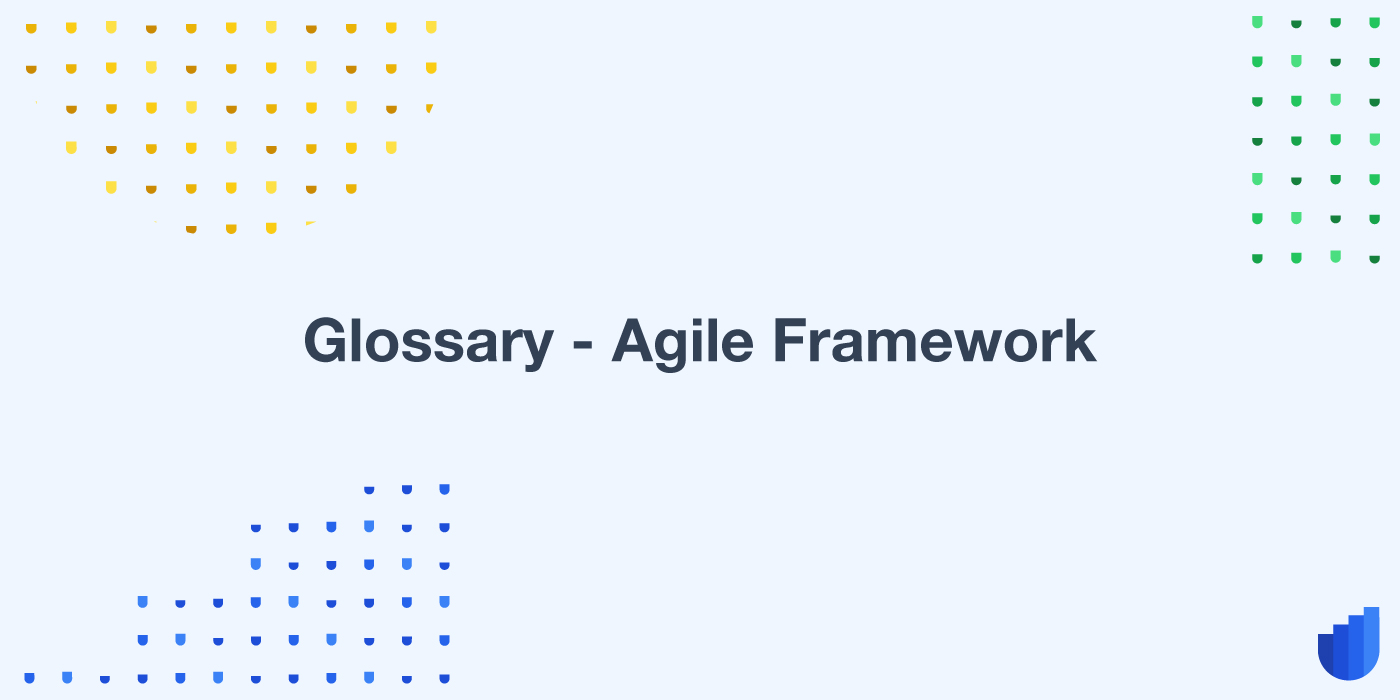 Companies across all industries have embraced Agile development, and it has displaced the traditional waterfall model as the gold standard of development philosophy.

With that said, Agile isn’t a single concept, but rather an umbrella term for many different frameworks. Organizations need to consider their needs, goals, and circumstances when deciding which Agile approach to implementing.

In this article, we will go through a brief overview of Agile, its history, and the most well-known approaches in the field.

What is Agile Framework?

Agile is an umbrella term for several approaches in software development. These approaches, also called frameworks, are based on the philosophy of satisfying customers through quick and constant iteration and continuous feedback. They aim to inspire collaboration among developers and put a heightened focus on building a quality project from the get-go.

While no two Agile Frameworks have the same characteristics, they are all guided by the same three principles: customer-centric, reactive, and swift yet short iterations.

A Brief History of Agile

Before Agile became near-ubiquitous in the world of programming and software development, the “Waterfall” method ruled the industry.

This way of building a project was slow and cumbersome, with every part methodically conceptualized before a single line of code was written. The process was extremely time-consuming, which was exacerbated by the fact that testing and fixing bugs would only occur once the product was already completed.

“People would come up with detailed lists of what tasks should be done, in what order, who should do them, [and] what the deliverables should be,” says Martin Fowler, Chief Scientist at global software consultancy firm ThoughtWorks. “The variation between one software and another project is so large that you can’t really plot things out in advance like that.”

This led to companies creating their own processes that were quicker, more flexible, and more efficient. These were all consolidated into a document called “The Agile Manifesto,” which a group of software developers signed in February 2001 during a three-day retreat in Snowbird, Utah.

Since then, companies across all industries have used or experimented with Agile, including the e-commerce giant eBay and the music streaming platform Spotify. Even Wal-Mart has embraced the philosophy, using it to innovate their hiring process, among other things.

Agile is a broad field with several unique approaches. These are some of the most frequently-used frameworks in the industry.

Arguably the most well-known Agile Framework, Scrum, involves using brief blocks of work called “sprints” to move projects forward. These usually consist of intervals between 1 week and 1 month long. The “Scrum Master” is the team guide and leads them.

It is easy to understand Scrum, which is why many organizations prefer using it. Scrum also allows for regular feedback and iteration, since teams discuss any project issues during daily meetings. However, its frequent and quick deadlines may pressure some developers.

When to Use Scrum:
Scrum is the ideal Agile Framework for your organization, if your projects are conceptualized, built, and handled by teams, rather than by executives issuing orders in a top-down hierarchy.

XP is an Agile Framework that seeks to create high-quality software programs that satisfy customers while simultaneously making life better for the developers. One of its guiding principles states that those involved in a project should not work for more than 40 hours per week.

Each team member is held accountable for their responsibilities, which boosts morale since they can take ownership of their work. However, this emphasis on code and the people behind it can sometimes lead to a subpar product design.

When to Use XP:
XP is the ideal Agile Framework for organizations working with clients whose software needs change frequently. It is also great for small development teams, who work closely together and are in regular contact with their managers and customers.

In DSDM, developers ensure that projects align with the company’s strategic goals and have a positive impact on its operations. Besides focusing on the needs of the business, they must also never compromise on the product’s quality.

One of the advantages of the DSDM approach is the swift and continuous delivery of the project’s functionality. Additionally, timely delivery and completion are among the framework’s guiding principles, allowing for rapid delivery of features. With that said, it can be expensive to implement, and it may require a very dramatic change in company culture.

When to Use DSDM:
DSDM is the ideal Agile Framework for large organizations that place a premium on a timely and within-budget project delivery. It’s also appropriate for those looking to improve their cross-functional internal structures by eliminating bureaucracy and encouraging more communication.

Three main principles govern the SAFe Agile Framework: Team, Programme, and Portfolio. Unlike most other Agile Frameworks, this does not consist of a single, overarching methodology. Rather, it involves a broad knowledge base. Here developers store proven best practices that helped them successfully execute projects in the past.

SAFe promotes transparency among teams, which enables developers to collaborate more effectively with each other. However, a few of its detractors claim that it does not adhere to the pillars of Agile. This is because it requires a significant amount of project planning and takes a top-down approach to decision-making.

When to Use SAFe:
SAFe is the ideal Agile Framework for enterprise organizations that are beginning to embrace this philosophy of software development. Keep in mind its tendency to undermine collective ownership and flexible roles.

FDD is a customer-centric approach to software development that enables teams to work closely together delivering a constant stream of updates to the project and regularly providing customers with information. It consists of a five-step process, whose different stages all focus on the product’s features.

This methodology allows for rapid development and helps developers push their products forward with continuous success. It can, however, be confusing for larger teams, because of a lack of written documentation and its strong dependence on the project’s lead developer or programmer.

When to Use FDD:
FDD is the ideal Agile Framework for big businesses attempting to deploy a large-scale software project. It is also perfect for those whose company culture is based on a more top-down approach to decision-making.

ASD is based on the principles of lightweight planning and continuous learning. It allows developers to quickly adapt to the changing needs of the market. It consists of a three-step process: speculate, collaborate, and learn. These three steps ensure that products are regularly tweaked and updated to keep up with consumer demand.

Because of this user-centric approach, products developed with the ASD methodology are very intuitive. This approach also encourages teams to complete their products ahead of schedule. So their features are still relevant to the market at the time of its deployment. However, this approach integrates testing at every stage, which can make it costly and time-consuming if not managed properly.

When to Use ASD:
ASD is the ideal Agile Framework for organizations that prioritize quick delivery times and constant innovation. The costs associated with this methodology, though, mean that it will only be appropriate for those with larger budgets that are adjustable during the project.

Rather than concentrate on a software’s processes and tools, the Crystal Method approach focuses instead on individuals and the way they interact with each other. This encourages teams to optimize their workflows and only use the most appropriate practices when executing a project.

Easily the biggest advantage of the Crystal Method is that it gives developers a sense of independence. It allows them to work in whatever way they want, as long as it is deemed to be the most effective. However, this approach is hampered by the lack of documentation and the absence of pre-defined plans. Both of which are likely to cause some degree of confusion.

When to Use the Crystal Method:
The Crystal Method is the ideal Agile Framework for organizations that prefer their development teams to work independently and with minimal input from management. Its tendency to overlook documentation, though, could prove to be a problem when other teams or stakeholders require information on a project.

As its name suggests, the RAD approach involves swift prototyping of products. This allows you to make quick iterations based on customer feedback. It means that different versions of those products are released to the market, where the next round of testimonials drives the team to introduce more updates or improvements.

Besides enabling end-users to receive products in less time, the RAD approach also allows developers to break down large, difficult projects into smaller chunks that are more manageable. However, this requires highly skilled teams and is not the most appropriate methodology for large-scale deployments.

When to Use RAD:
RAD is the ideal Agile Framework for organizations with skilled developers working on small projects. It is also great if their customers or end-users are willing to provide frequent feedback about their products.

Agile is a broad field, and these are just some of the frameworks in the industry. Each of these has its unique set of characteristics and benefits, and teams should carefully consider their needs and goals before selecting an approach.