The Eisenhower matrix is a framework for sorting tasks by urgency and importance to guide prioritization and improve time management. 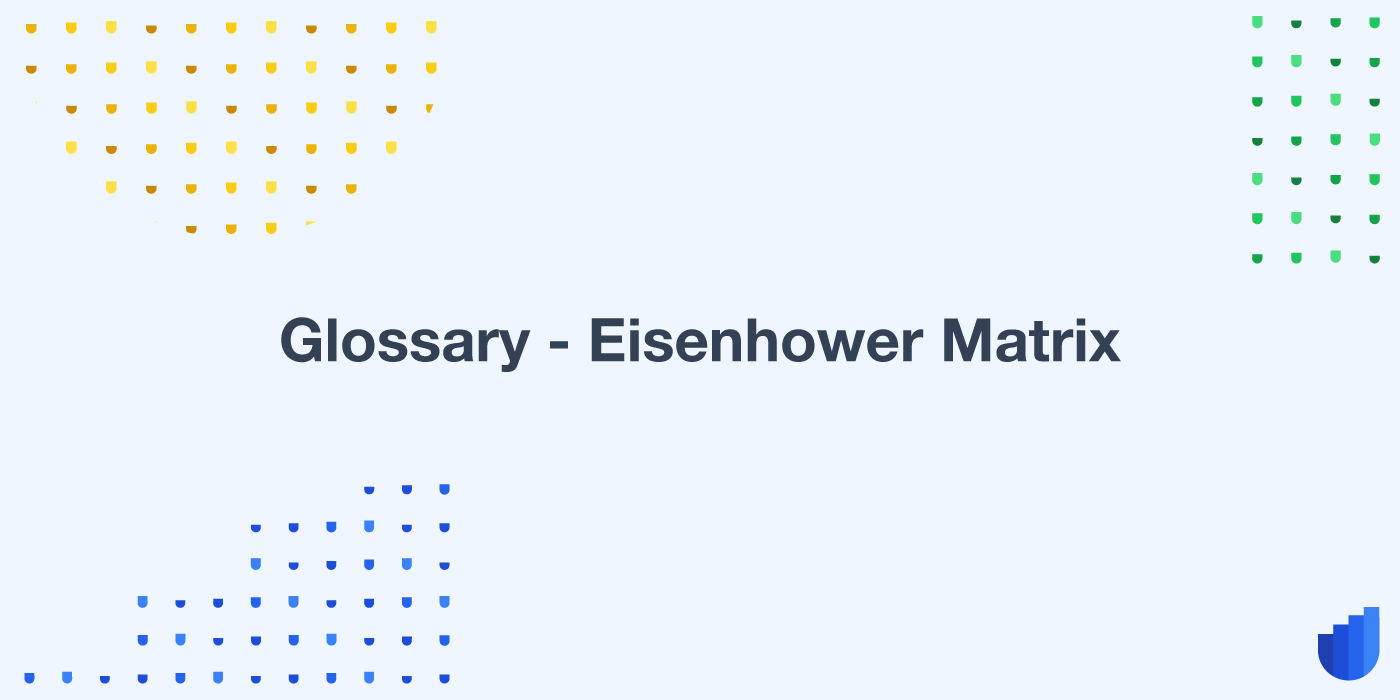 The Eisenhower matrix offers a solution for times when your team has more on their plate than they can reasonably achieve in a given period of time. By classifying tasks by importance and urgency, this matrix can help you ensure your team members aren’t amongst the 48% of employees who put in extra hours to catch up at the end of a workday.

In this article, we’ll take a closer look at the Eisenhower decision matrix, including what it is and how to use it effectively to increase productivity and decrease inefficiency in the product development process.

What is the Eisenhower Matrix?

The Eisenhower matrix is a system for sorting tasks in order of priority. As its name suggests, it incorporates the use of a matrix, which categorizes matters by urgency on one axis and by importance on the other axis.

When drawn, the matrix divides issues between one of four quadrants, corresponding to their levels of urgency and importance:

Time management experts attribute the creation of this decision matrix to Former President Dwight D. Eisenhower, who lends the method his name.

Before becoming the 34th president of the United States, Eisenhower served as a general in the U.S. Army during World War II. Faced with the need to make tough decisions regularly, this matrix allowed him to quickly identify which of the many tasks he should focus on each day.

Now that we know what an Eisenhower decision matrix is, let’s look at how to make and use one.

How to Use an Eisenhower Matrix

Start by creating a matrix with urgency along one axis and importance along the other. Use the spaces to define fields for Do First, Schedule, Delegate, and Don’t Do, as below:

As you fill in the matrix, rate your tasks by urgency and importance. The distinction between these two qualities might seem murky, so Steven Covey, author of The 7 Habits of Highly Effective People, suggests breaking them down as:

With that distinction in mind, let’s analyze each quadrant of the matrix a little more in-depth.

In the first quadrant, place the matters that are both urgent and important. These are tasks that are immediately important to the delivery of your product. They do not suit delegation well and require completion either today or tomorrow. They also have clear deadlines and consequences that need a crisis-mode response.

Quadrant 1 tasks are unavoidable, and because they’re so critical, they often consume a large part of your team’s focus and resources. The danger is that this could lead you to neglect the important, long-term goals in Quadrant 2 (or let your backlog pile up). To avoid this, try to keep tasks in this quadrant sparse in favor of pushing more tasks to other quadrants that can take them.

Examples of Do First tasks include:

Place items that are not urgent but important in this quadrant. These are activities that lead toward achieving your long-term product goals. Often, tasks in this quadrant do not have definite deadlines or even end dates, so putting them off in favor of more urgent tasks is easy.

Because tasks in Quadrant 2 often have a greater effect on your long-term success, your team should ideally spend the most time and effort on these tasks. Here, you accomplish tasks that offer opportunities and growth—instead of simply solving problems.

Examples of Schedule items include:

Filter tasks that are urgent but not important into the third quadrant. These are often tasks described as “busy work.” They are driven by necessity and have a minimal impact on your progress towards your long-term product goals.

For product managers with lots of roles and responsibilities to juggle, delegating these tasks allows you to focus more on the things that matter most to achieving key business outcomes. You might also have some activities which you prefer to outsource to other developer teams, rather than keeping them in-house – typically, the ones which are the least important parts of your SDLC. Or, you could choose to automate certain processes to free up your team’s time.

Examples of Delegate tasks include:

Time-wasting activities that are neither urgent nor important fall into the Don’t Do quadrant. They get in the way of meaningful work and can derail project timelines, without adding any value to the end product itself.

Don’t Do tasks can also include things that you want your team to actively avoid doing, like ineffective processes from previous which you’ve identified in retrospective meetings.

Examples of Don’t Do activities include:

Take Control of Your Time by Prioritizing

The Eisenhower decision matrix is a prioritization framework that helps product managers see which tasks to delegate, which to eliminate, and which to focus their efforts on most. Planning ahead for delivery timelines then becomes significantly easier, once your teams have a clear understanding of the importance and urgency of different tasks.